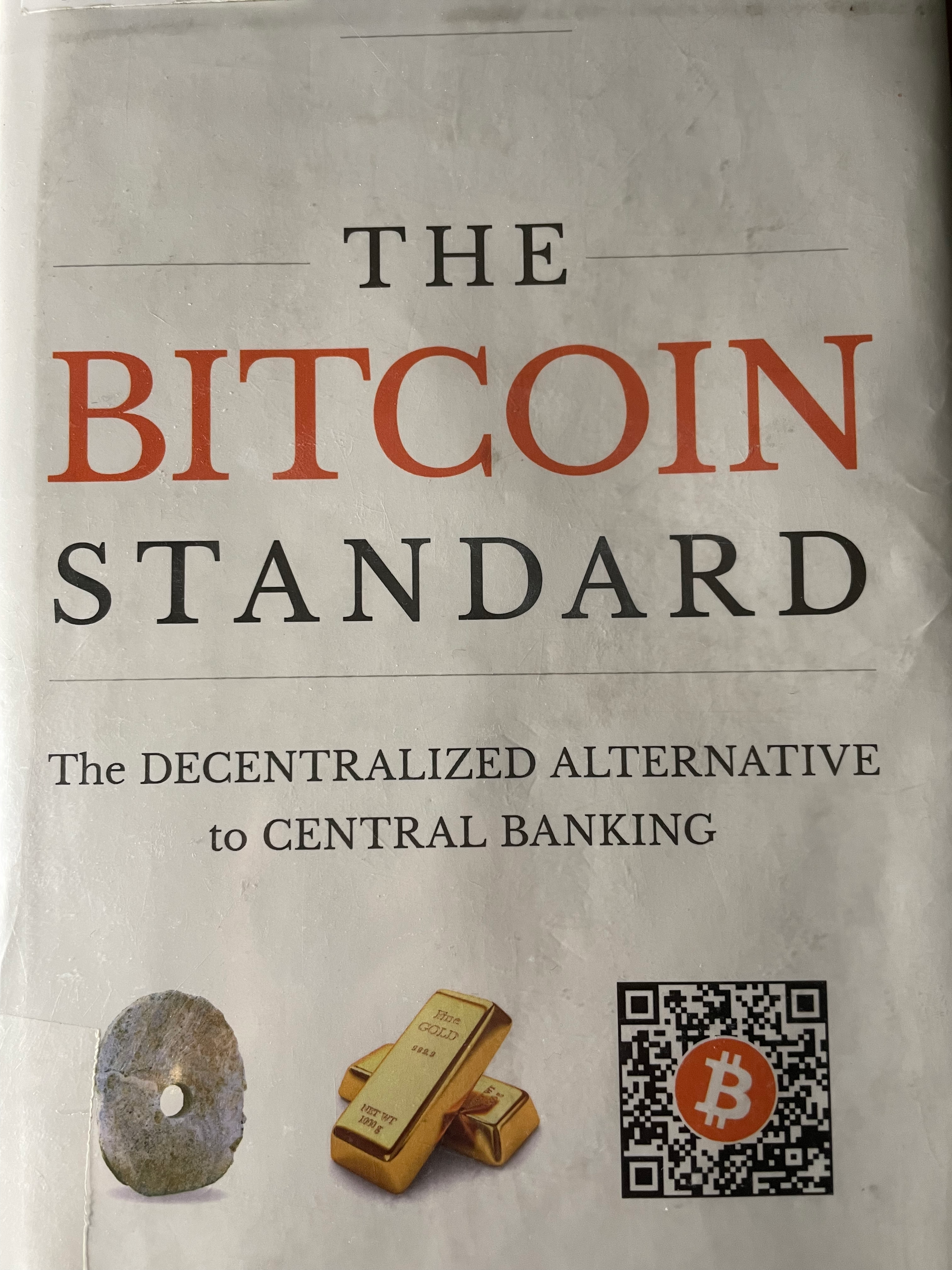 In The Bitcoin Standard, Saifedean Ammous, Professor of Economics at the Lebanese American University, advocates for Bitcoin as "an unstoppable and globally accessible hard money alternative to modern central banks."  Written nearly ten years after the introduction of Bitcoin, this book has become one of the go to resources for newcomers learning about its position in the history of money.

This book straddles the line between popular writing and academic reference, at it's best when the author outlines the history of money.  He's an economics professor after all.  It's a must read for anyone interested in Bitcoin.

The following paragraphs summarize each of the ten chapters in order.

Chapter 1 introduces Money, an age old technology that moves economic value across time and space. Money has three important properties. It is first a medium of exchange. It is second, a store of value. People prefer hard money that can be used across time with physical integrity and high stock (supply) to flow (additional production).  Third, it is a unit of account. The combination of these three properties allows accurate comparative economic calculation.

Chapter 2 describes the Primitive Moneys. The use of non-scarce items such as rocks, shells, beads, cattle and salt highlight the very great problem of low stock to flow. If someone can flood your economy with additional "money" the currency is debased and worthless. Such artifact money was easily overcome by mass utilization of hydrocarbon fuel energy to increase their production. Thus, there was a move to scarce metals.

Chapter 3 enumerates the Monetary Metals. Density and value made all metals easy to use and highly salable across space. Over time, it became clear that gold and silver were rarer and more durable than other consumable market goods like iron and copper. Of those two, gold came out on top due to its chemical stability and inability to be synthesized.  When put to use in real world economies it backed the Roman golden age, Byzantium, the Renaissance, and La Belle Epoque. In the 20th Century, the US dollar standard exposed the two basic flaws with gold. First, central banks would create more notes (receipts) than they had reserves. Second, settlement of payments between central banks also increased use of instruments ahead of available reserves.

Chapter 4 brings us to Government Money. Now we see the overwhelming urge to accelerate the economy with fiat (by decree) money. Countries start from sound money, with paper notes backed by gold. These notes are easier to use, as are ledger entries. Unfortunately, countries fall prey to the temptation to increase money supply to pay for their warfare and welfare states. They go into higher and higher levels of debt, which crowds out productive pursuits. Rather than create new value this effectively transfers money from producers to financiers.

Chapter 5 explains the connection between Money and Time Preference. People with low time preference sacrifice consumption today for investment that increases consumption tomorrow. High time preference people do the opposite. The problem with monetary inflation and currency debasement is that it forces a high time preference on natural savers. Over time, the productivity of the nation decreases and it no longer has the time to appreciate its people and culture.

Chapter 6 brings to light the use of money as Capitalism's Information System. Prices are the information. They reflect all inputs into the system. Socialism and cronyism (Cantillon effect), distort the signal, leading to misallocation of resources, which further drags on productivity and human flourishing. As a reader and business person, I find this section to include the  strongest arguments for a free market. Here's the money quote.

"Central bank planning of the money supply is neither desirable nor possible. It is rule by the most conceited, making the most important market in an economy under the command of the few people who are ignorant enough of the realities of market economies to believe they can centrally plan a market as large, abstract and emergent as the capital market."

Chapter 7 links Sound Money and Individual Freedom. Keynesians spend money they don't have. Monetarists cut taxes without reducing spending.  In both cases, governments that spend more than they receive in tax receipts debase their currencies to keep up. By contrast, Austrian economists advocate for sound money that the government can't mess with. This leads to low time preference and greater investment. Liberalism is to live in freedom and liberty. Liberality lets you do whatever you want. The government will pay for it. Taxes and balanced budget prevent this. Money goes to the right places to create value.

Chapter 8 says that Digital Money can change this dynamic. The author reviews the monetary properties of Bitcoin. It is the first digital cash to solve the double spend problem, eliminating the need for a trusted 3rd party online. The transaction are on an open ledger, proof for all to see. There is a detailed discussion of operational details here, which is followed by concern for volatility in the price of Bitcoin. Today it acts as digital gold. Though it has the value of a small country it is still relatively small in market cap compared to gold. Note Bitcoin's position on the S curve of technology adoption today. It's market value is just at the point where it takes off.

Chapter 9 asks the question What Is Bitcoin Good For?  First, it is a store of value (a medium of exchange with high stock to flow) with a high degree of portability. Second, it gives anyone in the world access to sovereign base money for individual sovereignty. It is freedom money. Third, it enables frictionless (fast, cheap and censorship-free) international and online settlement. Fourth it can eventually act as a global unit of account.

This last point deserves its own breakout here. It's been a few years since this book was written. Since then there has been a pandemic, a massive increase in US spending and money supply, and a serious shortage of collateral in the Eurodollar market. Given the lack of trust between nation states and the unmet needs in the Eurodollar market, this seems like an opportunity that may occur sooner rather than later. Let a few countries pick this up as a base layer for payments and it could take off quickly.

Finally, chapter 10 answers the Bitcoin Questions. This is probably the weakest section of the book. It is somewhat scattered and the questions it poses are likely to be better answered in the future. Thus,

Is Bitcoin mining a waste? No. It converts electricity into truthful records through the expenditure of processing power. This is the network's core value. It is literally creating the monetary stock that people can trust.

Can Bitcoin be changed? It has been notably resistant to change. The incentives for protecting the value previously created is too great.  In fact, Bitcoin has exhibited antifragility. Attempts to kill it only make it stronger.

Can Bitcoin Scale? Here's where the author could have used a crystal ball. He is correct to say that the Bitcoin layer itself can only handle 500,000 transactions per day. If used as payment rails for global international settlements, 850 central banks could each have one daily transaction with every other network bank. The only way to make it Visa scale is to add a layer on top of the bitcoin itself. The author mentions the Lightning Network in passing. Any subsequent revision will certainly add an entire chapter on Lightning.

Is Bitcoin for criminals? This is a tired misconception. It seems nicely private and out of view, but in reality the open ledger is a huge deterrent to crime. Addresses are easily linked to real world accounts and tracked to individuals. No one has evaded detection for long.

Do you need a blockchain? Just because Bitcoin uses a blockchain doesn't make blockchain the next new technology to be applied to every problem. It's a distributed ledger with a network of people who verify that it is true. It is expensive and slow. It's best used in trustless environments, where two parties are transacting large sums. There the cost of the transaction is lower with Bitcoin than it is with a third party.

Can anyone kill Bitcoin? The author lists a few things you can try to do. I won't go into detail on each one, but the list includes:

Of these, the last item is probably the only reliable attack on Bitcoin. The unmet need is sound money. If the US chose to purse a path of sound money it would crush Bitcoin and all other money alternatives in the world. But of course, this isn't going to happen. The country has a debt - GDP ratio of 130% as of this writing. It's far more likely to go into default than slow its spending.

And with that, we can wrap the review of this seminal work on the economic nature of Bitcoin as money. Any initial reading to understand Bitcoin as the decentralized alternative to central banking starts here.